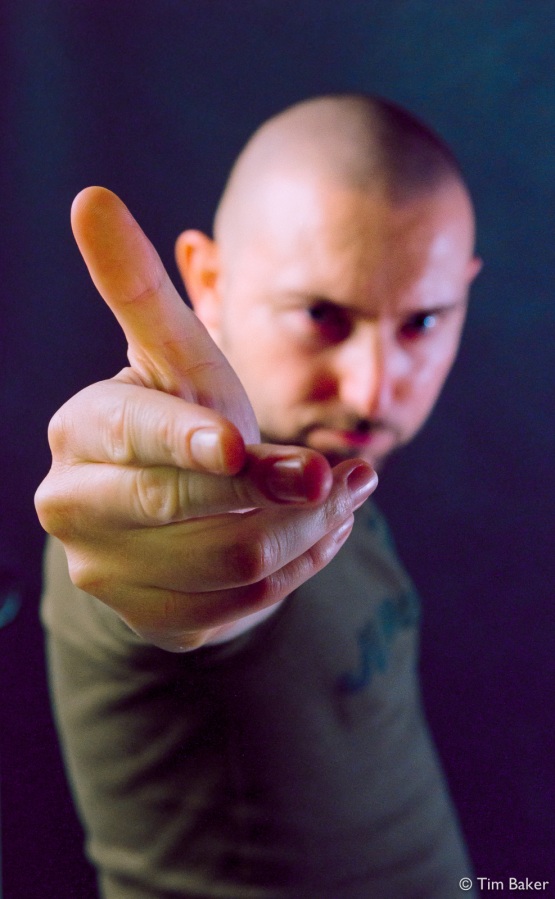 (yes I know but Doctor Who copied me, this shot was made in 2003 and online WELL before the David Tennant shot :-P)

Here are some of my recent scans – in 2003 I reckon this was my first photo studio session with Flash, or one of them…I kind of snook in (with permission, although the teacher wasn’t too keen) to the studio after waiting WEEKS to ‘introduced’ like some odd genteel dating game. As soon as me and the studio were ‘introduced’ I ran off intp a torrid love affair and got married at Gretna Green, or something.

I think for my first session with Flash I did really well…although I think the first actual studio session was a black and white one I did with Kirk, or John…I suspect so, I remember inflicting the Tungsten Lamp of Death on them, very hot! Obviously you can’t use tungsten lamps with colour film because of colour casts (although I suspect I did some lamp work with this because of the cross process) and I can see the softbox in Kirk’s eyes!

Here it is then…cross processed Kodak EL-2 (Elite Chrome! OMG!) even with a few shots of yours truly:

I seemed to be obsessed with eyes at this point…

The real challenge with cross process is colour…whether to leave the green ‘cast’ in – partly that gives cross-process it’s character but green skin tones aren’t really that nice to look at – and the fact that all the colours go crazy, so when you get an accurate skin tone, the others colours go completely haywire. Interesting however ‘normal’ you try to make a cross process shot, it always looks a little odd, especially in the shadows. I like that creeping oddness 😉 And the highlights blow, the contrast and grain ups, and colours tend to get luminescent if you turn up the saturation in a way that normal process doesn’t.

It’s for these reasons I spit on the ‘cross process’ presets on digital cameras…or Photoshop Infrared or Cross Process curves. They look OK, but nothing like the real thing (also see Hipstamatic etc.) – partly because both processes have elements of *randomness* – based around old expired and possibly faded slide film vs exhausted C41 chemistry, or halation and different frequencies of light zinging around the place and colliding with the grains or film, fogging and loose developing times (HIE at 1:1 D76 is between 7-11 minutes, take your pick!). It’s hard to get truly random from a computer – impossible in fact.