Just updated to Lightroom 4, and you can see the difference below as I redid one of my medium format images with the new ‘Process Version 2012’. Warning: on problem images it does tend to screw up your converted LR3 2010 pictures somewhat, coming out really light. It seems big changes in Contrast and the introduction of Highlights, Shadows and Whites sliders and changes with Clarity means if you have a photo using a lot of those (say a dark underexposed image, or with a lot of haze/flare) you might need to tweak it quite a lot – but my other more standard images hardly changed at all – the shot of Kirk for instance the auto-tone and the skin tones looked far more pleasing.

One good thing though is you’re given the option to view Before/After and can edit your image to match the previous Process Version, so it’s quite a quick process unless you have quite a ‘challenging’ image, in which case unless you feel there is something in the new Process Version you want, I’d leave old images be. What I found though is those old images looked rather odd in the old PV2010 in 4, they looked overexposed/light as if the brightness was turned up too high, so I’m not sure how good the claim is that your old images stay as they are…that’s the theory, but it seems a bit of a one-way upgrade so if you’ve got images you’re editing I’d recommend you finish and export them in LR3 before moving to LR4 and accept some of them will ‘shift’ and lighten.

The spotting is far faster – it tends to drag on the massive medium format scans in LR3, only slightly in LR4 as you click, then you can add another, speeding up the process no end. Also the gamut has been tweaked so highlights don’t blow so easily and it seems a softer curves at the higher end, leading to more pleasing skin in portrait shots.

Something strange when I first imported the catalog it took closing and reopening the program and some time before the previews showed (maybe they’re being ‘converted’ but there wasn’t an indicator for that, although it said it would), so if you get ‘no images found’ in Develop module try restarting the program, or opening up LR3, closing it down, then opening LR4, that seemed to do it.

I’ve also used the white balance temp/tint function on the mask brush – it’s great for when you have mixed lighting or the shift in colour due to being too close or too far away from the flash, noticed that bringing underexposed areas the colours tend to have a red bias (and too close a greenish tinge?) – this slider will help you balance the colours.

Check it out – here you can see the new PV 2012 image and to compare you can see the original JPG of the PV2010 version three posts below…it took more work to get ‘back’ to this state, but I do prefer it, the higher-range tones looks much more natural and less contrasty and highlights seem less likely to ‘blow’ – and better Clarity results although now needs to be more lightly applied :

There also seemed to be far less obvious ‘noise’ (look at the black jacket, the white bits are on the image, less prominent in the LR4 version) and colour seemed less likely to go to vivid when you turned up the contrast – this was slightly annoying actually as I liked the more saturated look so I had to play with Vibrance and Saturation, but it’s good news if you have images like this which usually when you turn up the Exposure gain and contrast things used to get a little day-glo. Opposite seems to be true now, it seems to err on the other side of neutral.

And here you see the original scan – ugh indeed. That’s the magic of the tools in Lightroom and also a decent colour negative scanner (transparency might be a different story) you can get something out of a failed negative like this (what happened is I was trying to bounce light from behind, I now know I probably should have put a small flash in front, or put large reflectors closer – the balancing in this high key soft type shot, something that’s used a lot in fashion, is very hard. 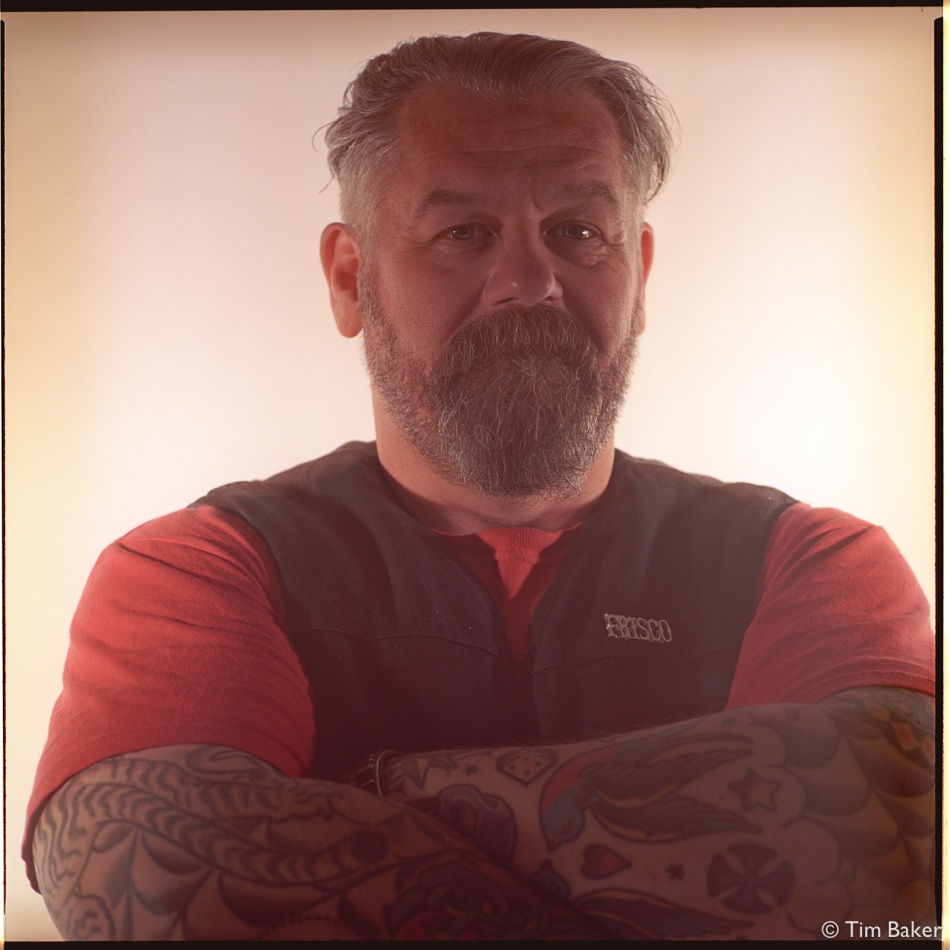 Not tried the other features in LR4 – import seems a LOT faster, though…but looking forward to reverse geoencoding using GPX Logger on my Android phone and using the new Map feature where you can sync a GPX file to a set of pictures so you can use any camera and don’t need an expensive device trailing a cable off your camera to tag the GPS location – yes that’s more accurate but it’s the hassle of having wires I don’t want…and this is free!

Everybody starts somewhere: my first black and white film

Just to show you that you don’t just pick up a camera and become good – nor is it the camera that’s doing it (both big misconceptions, the amount of times I’ve shown people pictures and they’ve damned me with faint praise by saying ‘You must have a good camera!’ – grr. It’s not the camera but the person holding it, within limits as I’ll explain) here is scans from the first film I shot in black and white, and the first film I developed. And seemingly the first film I covered in talcum powder then ran a chisel over by the quality of the negs, if you zoom in it’s like snow…but I hadn’t a clue then how to handle neagtives, and also I think underdeveloped them and there were several accidents, and I suspect contamination during drying or developing since they looked pretty crappy back then too.

I am aware people pay loads of money for apps to create this out of focus / halation / grunge effect and here I am spending ages in Lightroom spotting the galaxy!

Anyway here is my shots from Godalming College, circa early 1992. Above is the first proper shot of Kirk, and probably the first portrait shot I was proud of. All of these are shot on Ilford FP4 ‘Safety Film’ (!!!) I think bulk loaded at the college. Camera – well hence the limits I was talking about, I was using a rather strange second hand Russian or German 35mm camera, I forget the make but those who like Holgas or toy cameras probably would love it. It had a square aperture, and the lens seemed to be falling off…it was almost impossible to focus or work out how to focus it, I obviously worked it out towards the end of the film as I do have some in focus shots, but it seemed rather shallow depth of field – and also using 125 ISO film in those dark classrooms was also not easy.

Needless to say I didn’t use the camera again, but quickly got a cheap Praktica SLR rather than borrowing my Dad’s old trusty yet heavy Zenit and the rest is history. 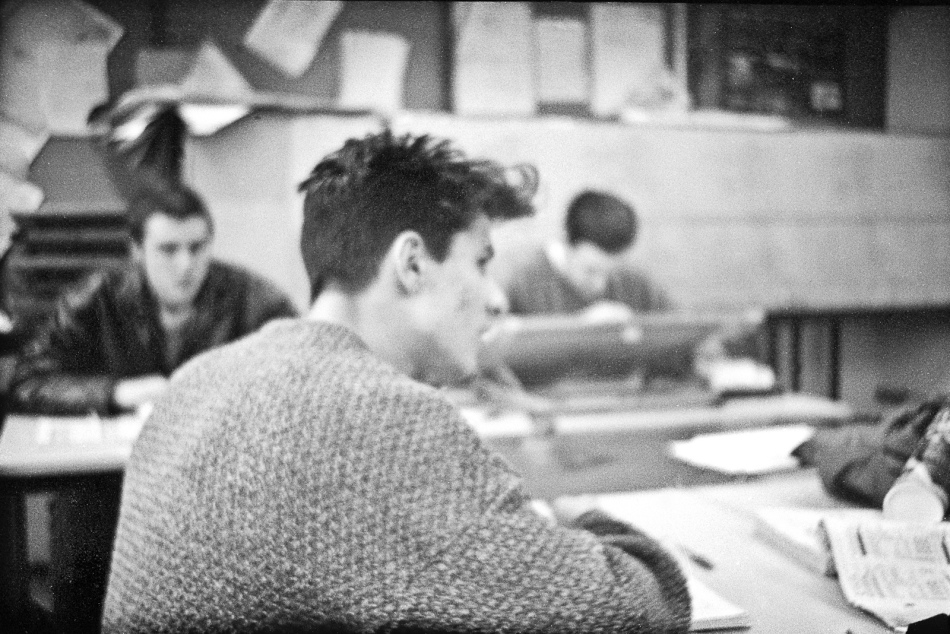 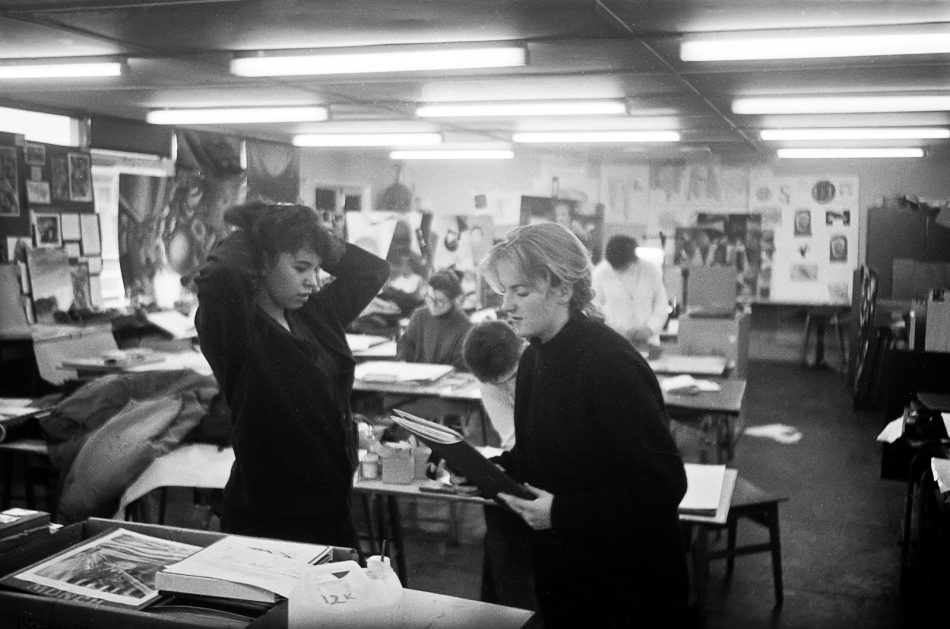 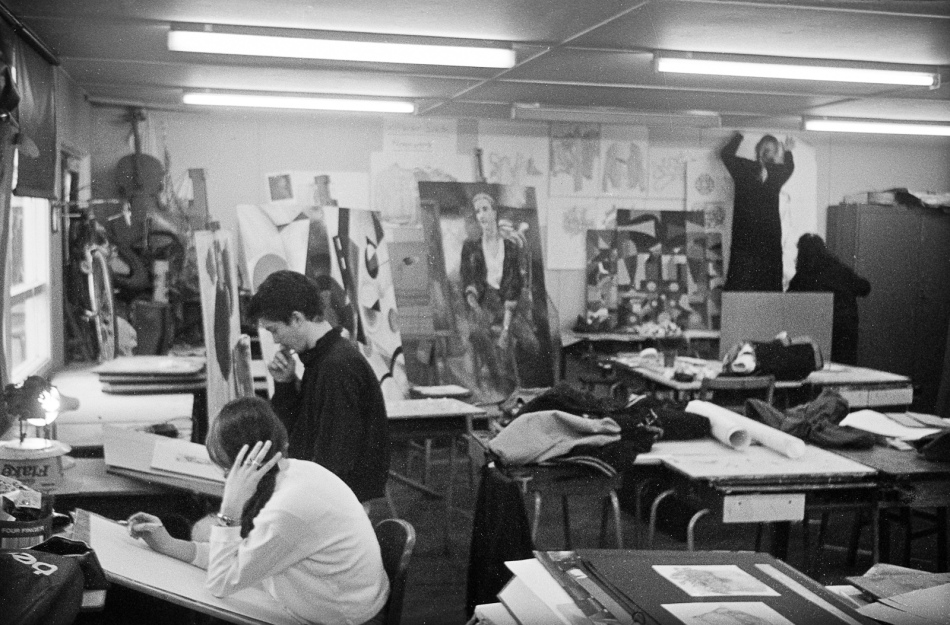 What was your first b&w, or indeed first film like?