While the world was going mad in September 2001, I was walking in the Isle of Skye taking pictures, mostly monochrome…seemed the safest place to be. This is shot of a rather disturbingly shot up PASSING sign on the top of the remote Quirang – well not so remote as it doesn’t have a road, but after 5pm there was no traffic, and I decided to walk across it in late afternoon which yes, meant walking at night by the time I got over the top….where there was only sheep (including spookily dead ones – that shot I used for KLF Dead Sheep show is from this walk) and remains of ancient huts for company.

I lost my Smith & Wesson cap up there, too – wearing it ironically, was doing a sort of Unabomber/Crazy Gunman Chic thing which really wouldn’t translate in the US and I wince thinking about that now (was trying to prove a point at work, freak them out, punk in a way…) a gust of wind took it off my head and I couldn’t find it even though I saw it go. Just vanished….the feeling of place on the top was, odd. Very strange vibes and felt very remote – I mean after 11 years I can still see and feel that place, where people used to live a long time ago.

This is scanned on my new 120 glass holder* for the Nikon Coolscan 8000 – one of the problems with the holders that are supplied is they don’t always keep the negative completely flat – not usually a problem but with curved or bent negatives that’s a real problem as those bits that curve drop out of focus.

I doubt any of you have noticed this, but it bugged the hell out of me that such an expensive scanner couldn’t do edge to edge sharpness – which it can now, even with 35mm. The glass holder just has special glass in it that sandwiches the negative flat…less scary than ‘wet mounting’ which is what it sounds, it’s applying a special alcohol based solution with a glass holder which keeps the negative flat in the same way that a piece of paper ‘sticks’ to the floor when wet. A lot of professionals use wet mounting, but the idea of putting liquids on my negatives and in my scanner, well, I don’t really like that.

* What’s the holder? Well negatives are held by a large plastic flat cartridge, which keeps the negatives from 35mm upto 120 size in place as the motor moves it around from negative to negative – probably different to scanners people have used, the idea the negative moves rather than the scanner head, rather than the other way round – but in professional scanners that’s usually what happens (drum scanners I think also rotate the negative in a drum around the ‘slit’ where the scanner is). It also means you can batch scan negatives, Upto 3/4 120 negatives, 12 35mm and 6 slides.

It’s a wonder of technology, anyway…

And thanks to Jeb 50poundnote for helping me ship it here, the taxes and shipping cost MORE than the holder, and of course you can’t get it here, or if you can it’s actually more than even direct $ = £ conversion which is crazy. Or Cray-Cray as the song goes.

Anyway planning to scan all my 2001 Skye pics, as I think the prints really didn’t do them justice, and also my early 2000s shots of East London in protest of the Olympics. 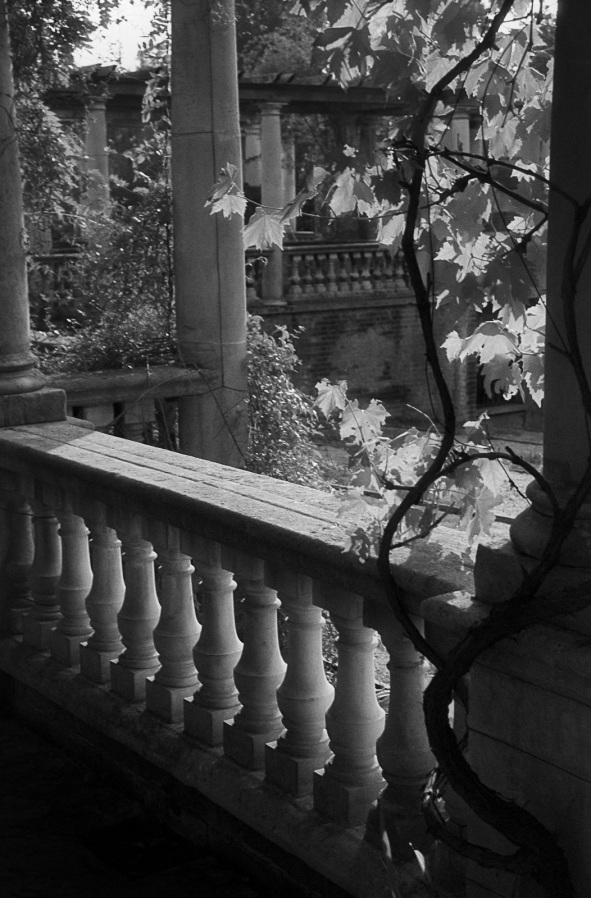 Only a few shots on this one, but at least one real winner which is the one of the Pergola at Vale of Health, part of Hampstead Heath above. Was there taking some shots with Kirk which is how I can date it to 2003.

These were shot with Konica 750nm (750nm being the wavelength that the film is receptive to) infrared film – which strictly wasn’t compatible with the filter I had – that let in a much higher wavelength I think….but these shots proved it worked just the same, maybe not as dramatically as if I’d hada filter that went down to 750nm, but looks pretty ‘infrared’ to me: 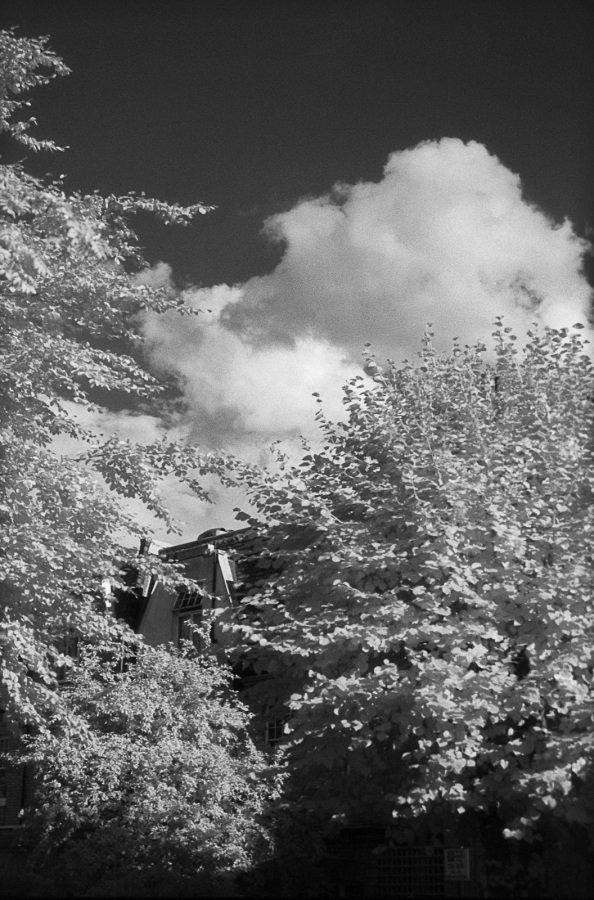 It also has a demonstration shot of the effect of infrared, which I might’ve taken for my City and Guilds Level 2 I was doing at the time…I did include some Infrared in my B&W book but not these, obviously. If you don’t know how infrared film works, you have to use a specially made IR purple/dark red filter to expose the red & infrared frequencies with it otherwise the film just works as normal.

I used a cheap Lee 87 Gel filter I modded onto a piece of perspex cos IR glass filters are really expensive. All I did was cut two pieces of thin perspex into the same sized squares – I got the thin sort you could actually cut with scissors – then I sandwiched the gel in between them and stuck it together with tape – you don’t really need to worry about it being perfectly optical because a) IR is fairly random and foggy anyway and b) it’s really close to the lens so any imperfections probably won’t be seen. There’s a DIY tip for you wanting cheap filters 😉 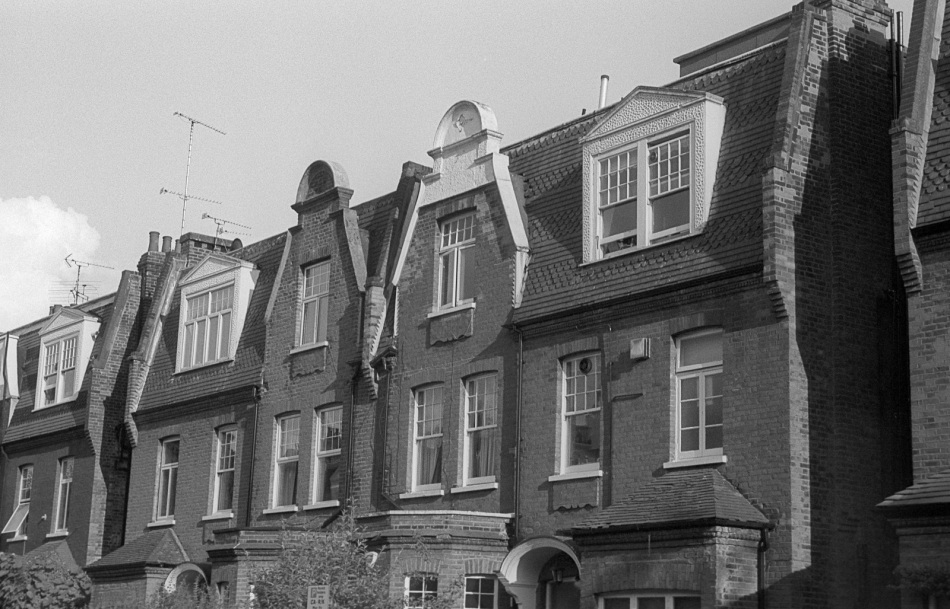 And with the filter: 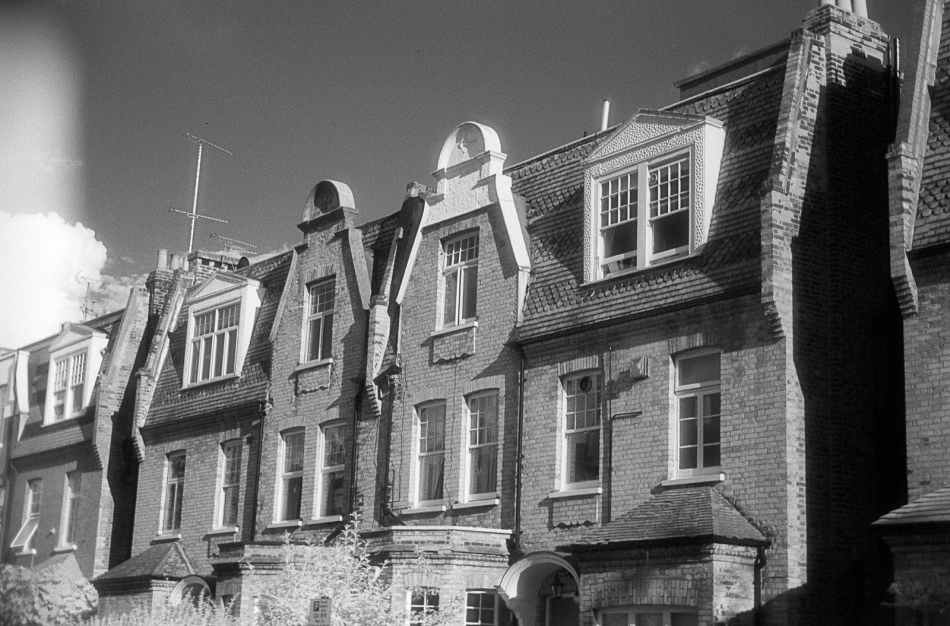 I’m not sure if all of these shots are using the filter – unless you have a lot of not-backlit greenery or sky it’s not always obvious. I suspect in the Pergola shots I didn’t, although they still have a slightly unearthly quality all the same. But judging on the lack of odd skin tones in this (skin tones in infrared make you look like an alien grey, translucent with strange eyes) shot of Kirk I’m sceptical I did use the IR filter for these shots: 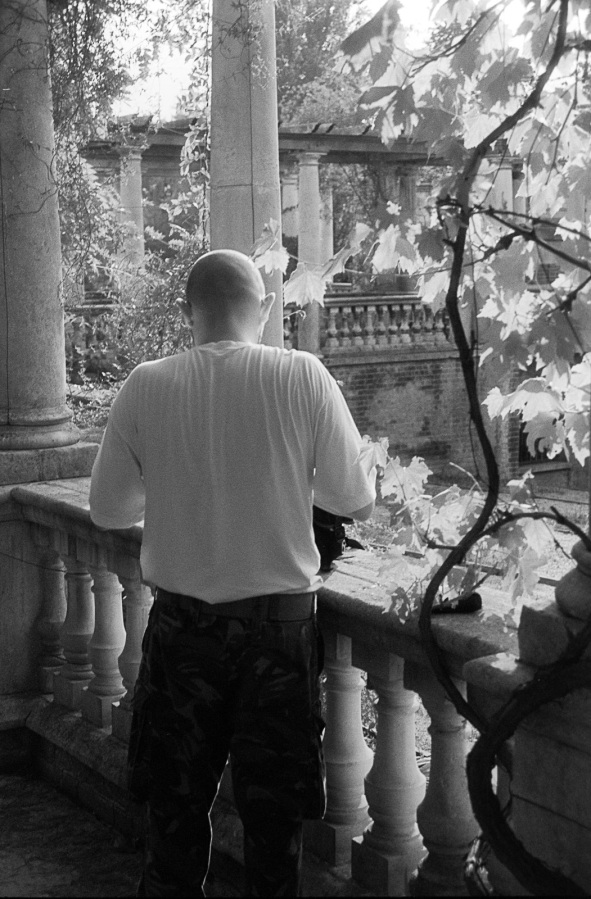 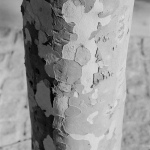 Wrote this on another blog of mine but it bears repeating here – It’s obvious I have a very different style with film and black and white…I remember skulking around looking for textures and shadows, and of course colour means nothing, it’s all about the contrast – what usually looks to you as being contrast is quite often different intense colours and looks completely limp in black and white.

I miss that considered approach…just flicking ‘black and white’ switch isn’t really it (why I’ve never used the ‘Black and White’ function in Lightroom til now) because the visual thinking is different. The approach is different. The headspace is different. You need to be in the right mindset, and it usually shows if you do it after the fact.

Also there seems to be loads of diagonals, but hey, I’m an ex-art student. That’s what they get taught 😉

And many pictures of plane trees for some reason… 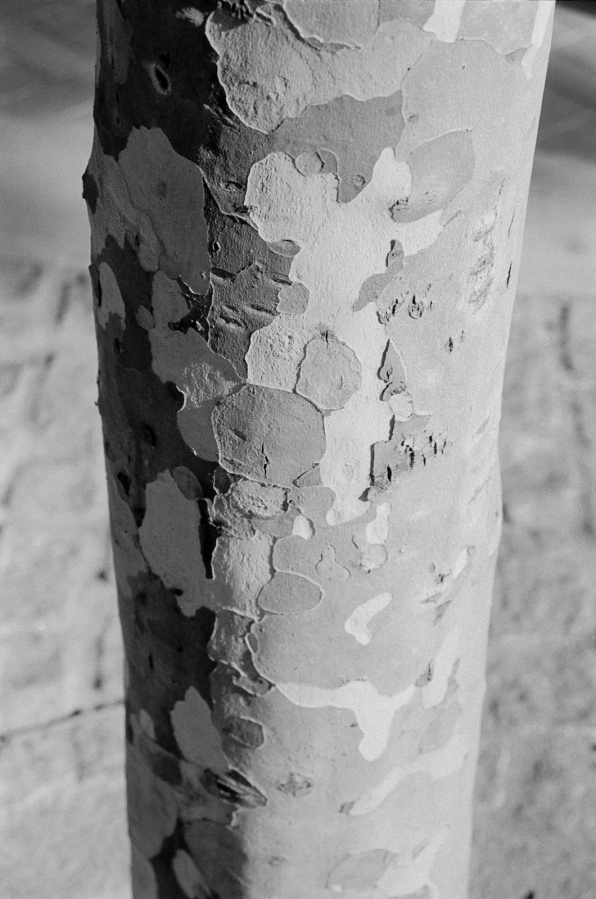