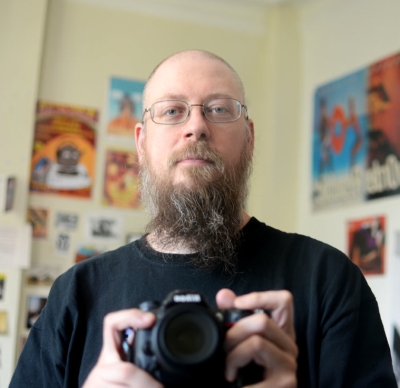 I’ve been a photographer since I was 8 years old when I got a Galt plastic toy 127 camera which leaked light and the pictures ended up looking like those psychic photographs that were all the rage in the 1960s and not the wonderous pictures of Paris I was intending. Not to be put off I bought my own second second-hand 126 Instamatic camera (I still have it, and a small collection of them!) for 25p at a jumble sale and never looked back.

Today’s cameras are slightly more complex in technology but not in process or intent and although I switched to digital in 2004 I’m revisiting analog chemical photography for the first time in years. Partly this is because the purchase of a film scanner is making me revisit and sort out my collection, so I thought I’d blog about being analog in a digital world…but I’m aiming this to be a place for all my photogeeking and discoveries on photography, not specifically nostalgia or old skool photography. Planning to revisit my medium format camera too and portraiture which I stopped doing about 2-3 years ago. I want to make it my trade, eventually.

I live in London so some posts are going to be UK/London centric, so (no) apologies for that…and if I recommend a service or company it’s not cos they paid me, I don’t do adverts in any of my blogs (this is one of several, which I might mention, but let’s not confuse things for now shall we? 🙂 – I do have one other photo-related blog which is a mo-blog for my street photography called Streetise.

I am on Flickr as fingertrouble and a less formal set of pictures at my Picasa site.

* yes I dropped it a few months later, twice while in South Africa. Credit to Nikon those things bounce. The Transcend card that was in it with the unreplaceable pictures, less so…